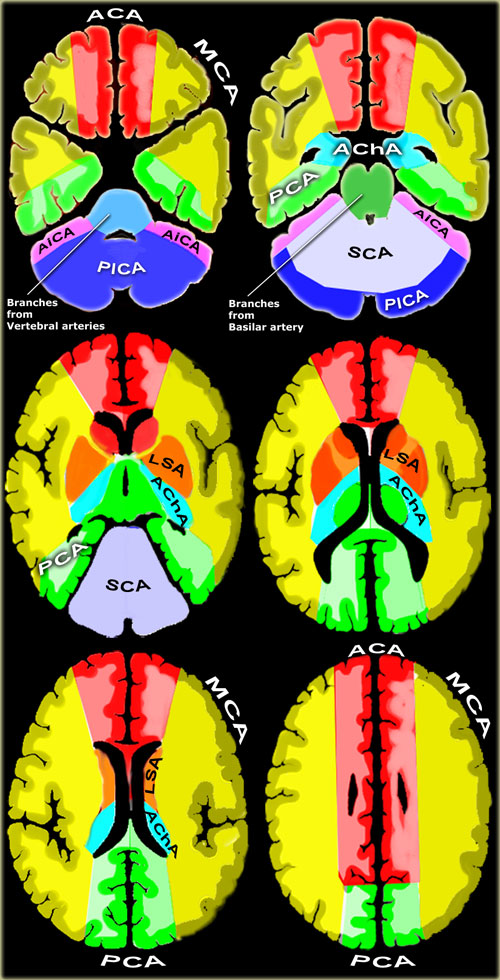 Vascular territories of the cerebral arteries (adapted and modified with permission from M. Savoiardo (1) 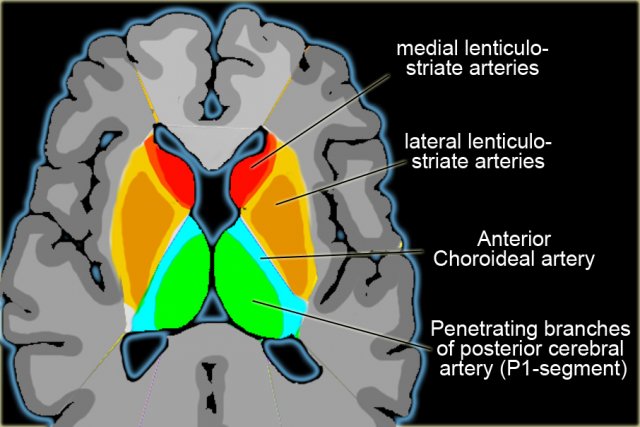 On the left a detail to illustrate the vascular supply to the basal ganglia. 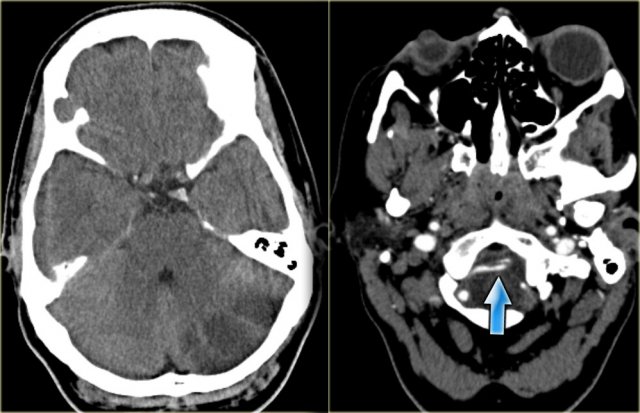 On the left CT-images of a left-sided PICA-infarction.
Notice the posterior extention.
The infarction was the result of a dissection (blue arrow).

Infarctions at pontine level are usually paramedian and sharply defined because the branches of the basilar arery have a sagittal course and do not cross the midline.
Bilateral infarcts are rarely observed because these patients do not survive long enough to be studied, but sometimes small bilateral infarcts can be seen. 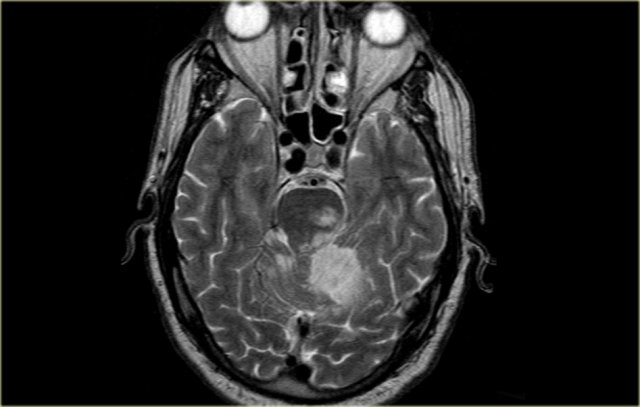 On the left MR-image of a cerebellar infarction in the region of the superior cerebellar artery and also in the brainstem in the territory of the PCA.
Notice the limitation to the midline. 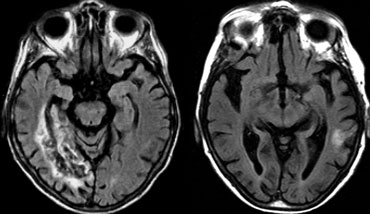 The anterior choroidal artery originates from the internal carotid artery.
Rarely it arises from the middle cerebral artery.

On the left an uncommon infarction in the hippocampal region.
Part of the territory of the anterior choroidal artery and the PCA are involved.

The MCA has cortical branches and deep penetrating branches, which are called the lateral lenticulo-striate arteries. 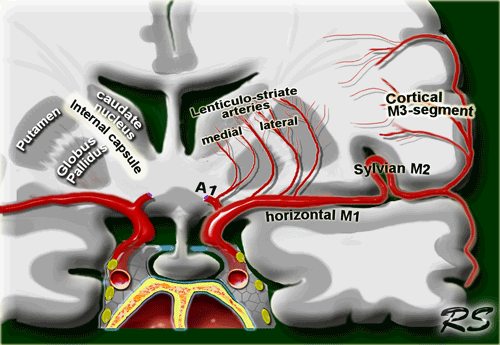 Lateral lenticulostriate arteries
They are branches of the horizontal M1-segment of the middle cerebral artery.
They supply the superior part of the head and the body of the caudate nucleus, most of the globus pallidus and putamen.
They also supply the anterior limb of the internal capsule and parts of the posterior limb of the internal capsule, which is largely supplied by the anterior choroidal artery. 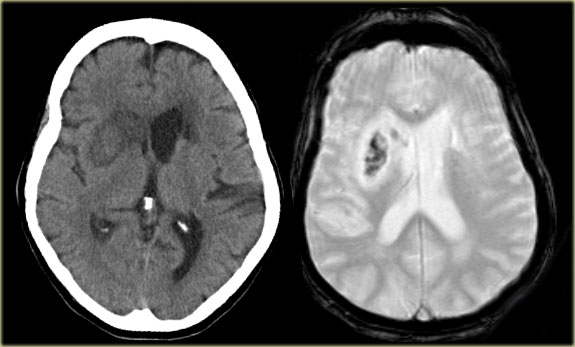 On the left images of a hemorrhagic infarction in the area of the deep perforating lenticulostriate branches of the MCA. 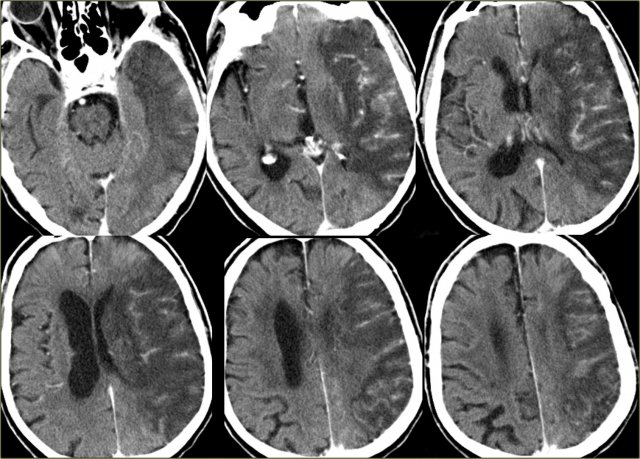 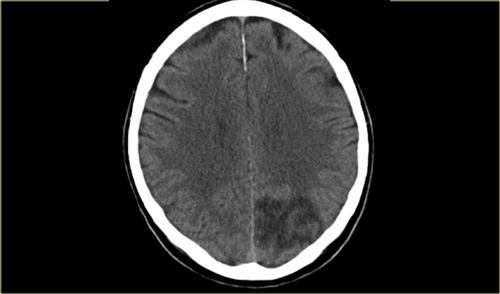 Deep or proximal PCA strokes cause ischemia in the thalamus and/or midbrain, as well as in the cortex.
Superficial or distal PCA infarctions involve only cortical structures (4).

On the left a patient with acute vision loss in the right half of the visual field.
The CT demonstrates an infarction in the contralateral visual cortex, i.e left occipital lobe. 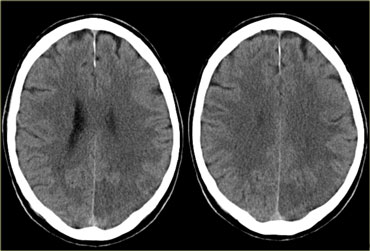 Only about 5% of ischemic strokes involve the PCA or its branches (3).

On the left CT-images of a patient with a PCA-infarction. Notice the loss of gray/white matter differentiation in the regio of the left occipital lobe.

Variations in perfusion territories in the brain can be visualized with selective arterial spin-labeling (9).
The ability to visualize these perfusion territories is important in specific patient groups with cerebrovascular disease, such as acute stroke, large artery steno-occlusive disease, and arteriovenous malformation, as it provides valuable hemodynamic information.

On the left the time-of-flight MR angiography-images of brain-feeding arteries showing the planning of the selective slabs for perfusion territory imaging of the left and right internal carotid artery and the vertebrobasilar artery. 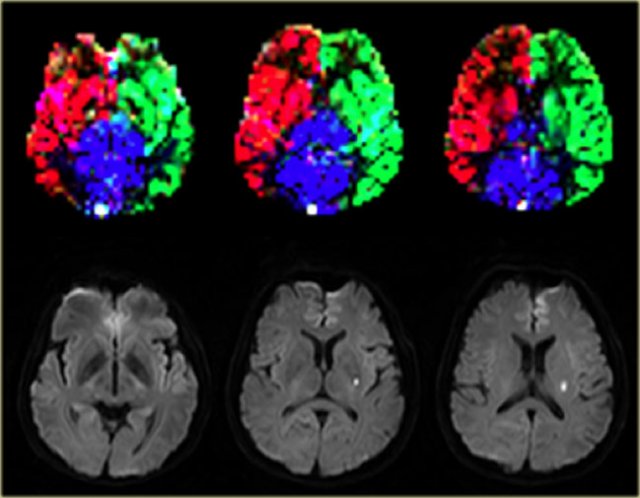 On the left a patient with a lacunar infarction on the left with normal perfusion territories. 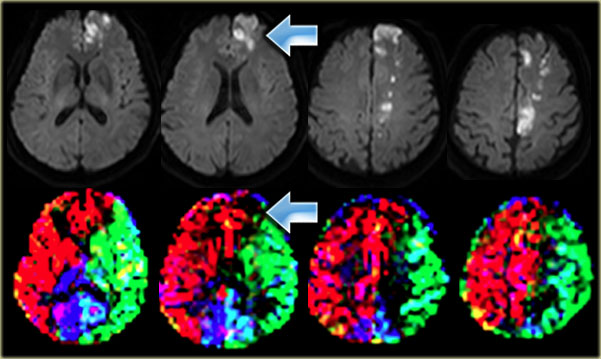 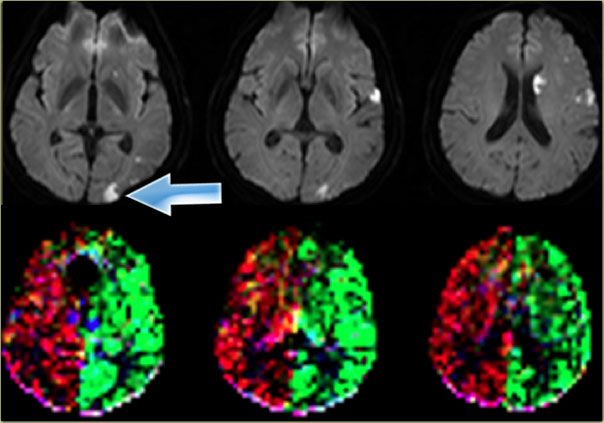 On the left another variation in the brain perfusion in a patient with multiple infarctions as demonstrated on the diffusion images.
There is a small cortical infarction in the left occipital lobe which happens to be perfused by the left internal carotid artery (arrow).
Notice that there is no contribution by the vertebrobasilar arteries. 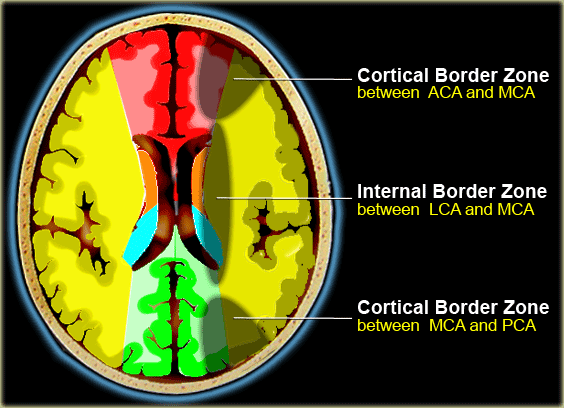 Watershed infarcts occur at the border zones between major cerebral arterial territories as a result of hypoperfusion.


There are two patterns of border zone infarcts: 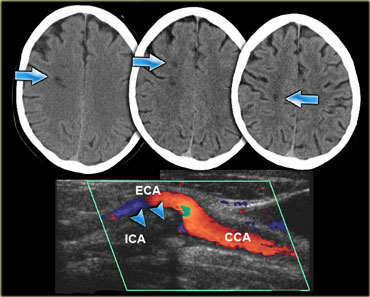 On the left three consecutive CT-images of a patient with an occlusion of the right internal carotid artery.
The hypoperfusion in the right hemisphere resulted in multiple internal border zone infarctions.
This pattern of deep watershed infarction is quite common and should urge you to examine the carotids.

See the article on Multiple Sclerosis for the differentiation between internal border zone infarctions, lacunar infarctions and MS. 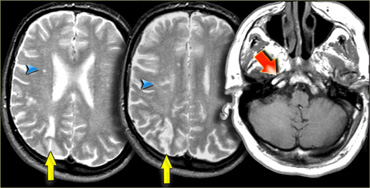 Borderzone infarcts due to occlusion of the internal carotid

On the left images of a patient who has small infarctions in the right hemisphere in the deep borderzone (blue arrowheads) and also in the cortical borderzone between the MCA- and PCA-territory (yellow arrows).
There is abnormal signal in the right carotid (red arrow) as a result of occlusion.
In patients with abnormalities that may indicate borderzone infarcts, always study the images of the carotid artery to look for abnormal signal. 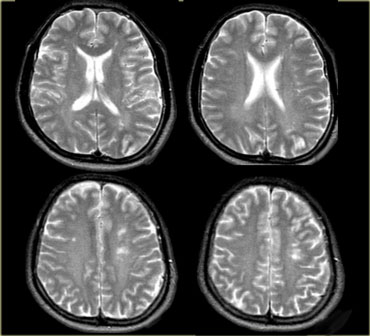 On the left another example of small infarctions in the deep borderzone and in the cortical borderzone between the MCA- and PCA-territory in the left hemisphere. 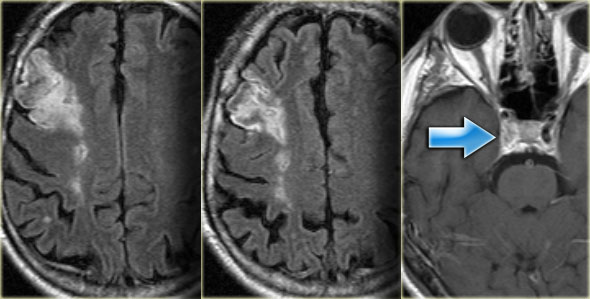 On the left an example of infarctions in the deep borderzone and in the cortical borderzone between the ACA- and MCA-territory.
The abnormal signal intensity in the right carotid is the result of an occlusion.
This combination of findings is so common, that once you know the pattern, you will see it many times. 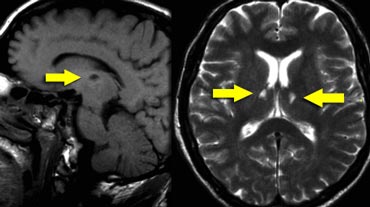 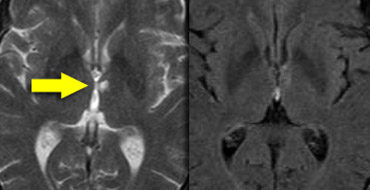 On the left a T2W- and FLAIR image of a lacunar infarct in the left thalamus.
On the FLAIR image the infarct is hardly seen.
There is only a small area of subtle hyperintensity.

Lacunes may be confused with other empty spaces, such as enlarged perivascular Virchow-Robin spaces (VRS).
The VRS are extensions of the subarachnoid space that accompany vessels entering the brain parenchyma.
Widening of VRS often first occurs around penetrating arteries in the substantia perforata and can be seen on transverse MRI slices around the anterior commisure, even in young subjects (5).

On the left CT- and MR-images at the level of the anterior commisure (blue arrows).
On the CT there is a hypodense area in the right hemisphere, which follows the signal intensity of CSF on T2W- and FLAIR-images, which is typical for widened VRS. 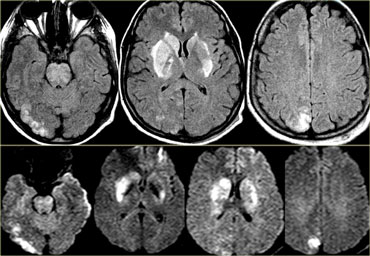 PRES is short for Posterior Reversible Encephalopathy Syndrome.
It is also known as reversible posterior Leukoencephalopathy syndrome [RPLS].
It classically consists of potentially reversible vasogenic edema in the posterior circulation territories, but anterior circulation structures can also be involved (6).
Many causes have been described including hypertension, eclampsia and preeclampsia, immunosuppressive medications such as cyclosporine.
The mechanism is not entirely understood but is thought to be related to a hyperperfusion state, with blood-brain-barrier breakthrough, extravasation of fluid potentially containing blood or macromolecules, and resulting cortical or subcortical edema.

The typical imaging findings of PRES are most apparent as hyperintensity on FLAIR images in the parietooccipital and posterior frontal cortical and subcortical white matter; less commonly, the brainstem, basal ganglia, and cerebellum are involved.

On the left images of a patient with reversible neurological symptoms.
The abnormalities are seen both in the posterior circulation as well as in the basal ganglia.
Continue. 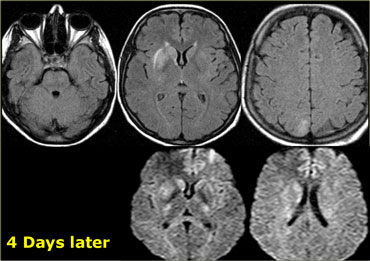 Four days later most of the abnormalities have disappeared. 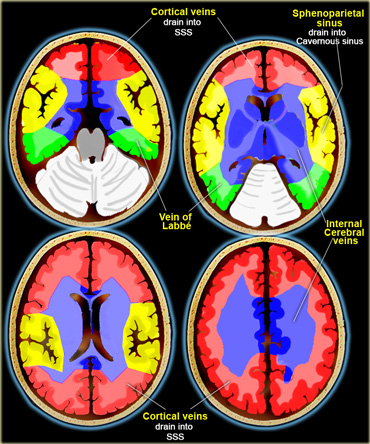 There is great variation in the territories of venous drainage.
The illustrations on the left should be regarded as a rough guide. 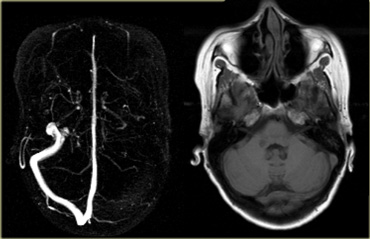 Cerebral venous thrombosis results from occlusion of a venous sinus and/or cortical vein and usually is caused by a partial thrombus or an extrinsic compression that subsequently progresses to complete occlusion (7).
Dehydration, pregnancy, a hypercoagulable state and adjacent infection (eg, mastoiditis) are predisposing factors.
Cerebral venous thrombosis is an elusive diagnosis because of its nonspecific presentation.
It often presents with hemorrhagic infarction in areas atypical for arterial vascular distribution.

Imaging plays a key role in the diagnosis.
On the far left a MRA with non-visualization of the left transverse sinus.
Since the venous anatomy is variable, this can be due to absence of the transverse sinus or thrombosis.
The T1W-image on the right clearly demonstrates, that there is a transverse sinus on the left, so the MRA findings are due to thrombosis.
Continue with next images. 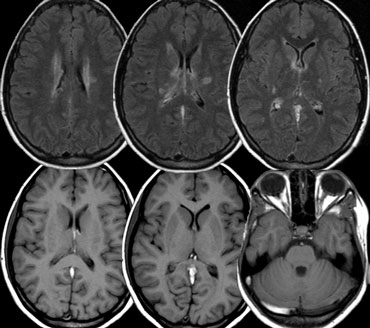 Thrombosis of deep cerebral veins
The clinical presentation of thrombosis of the deep cerebral venous system are severe dysfunction of the diencephalon, reflected by coma and disturbances of eye movements and pupillary reflexes.
Usually this results in a poor outcome.
However, partial syndromes without a decrease in the level of consciousness or brainstem signs exist, which may lead to initial misdiagnoses.
Deep cerebral venous system thrombosis is an underdiagnosed condition when symptoms are mild and should be suspected if the patient is a young woman, if the lesions are within the basal ganglia or thalamus and especially if they are bilateral.

On the left images of a patient with deep cerebral vein thrombosis.
Notice the bilateral infarctions in the basal ganglia.
Continue. 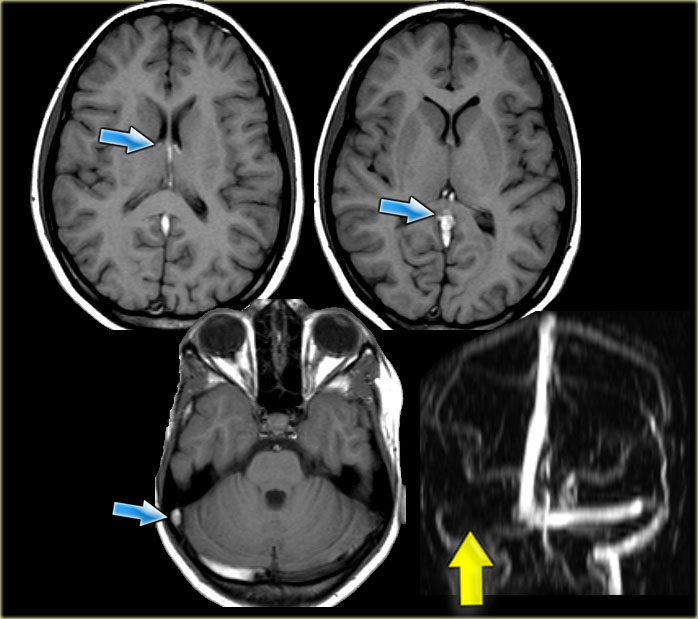