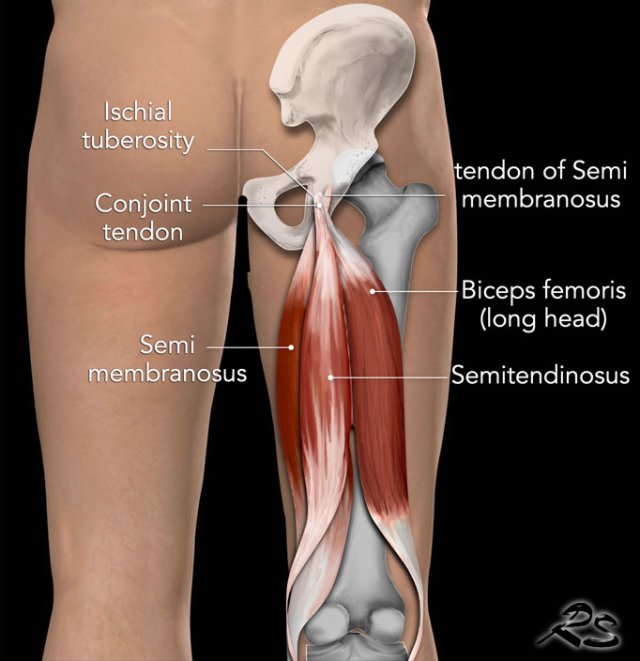 The hamstrings are the muscles in the posterior compartment of the thigh and consist of the biceps femoris, semitendinosus and semimembranosus.
They are innervated by the sciatic nerve and contraction results in extention of the hip and flexion of the knee.
The conjoint tendon is formed by the long head of the biceps femoris laterally and the semitendinosus tendon medially.

Semitendinosus
The semitendinosus is a largely tendinous muscle, which is located medially to the biceps femoris, and covers the majority of the semimembranosus muscle.

Semimembranosus
The semimembranosus muscle is flattened and broad. It is located underneath the semitendinosus. 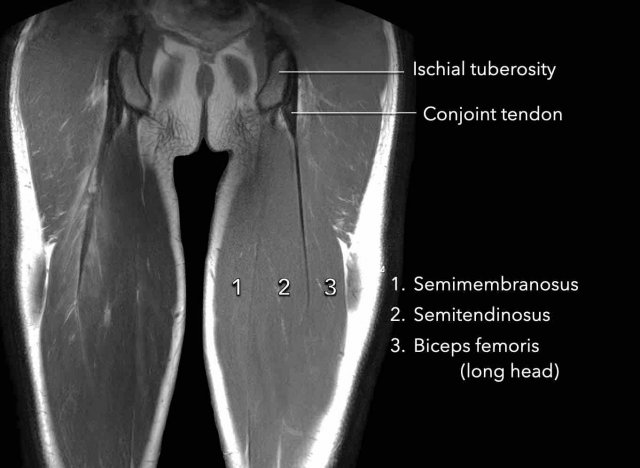 Here the anatomy on a coronal MR image.

The insertion of the semitendinosus (2) on the hamstring origin is partly muscular. 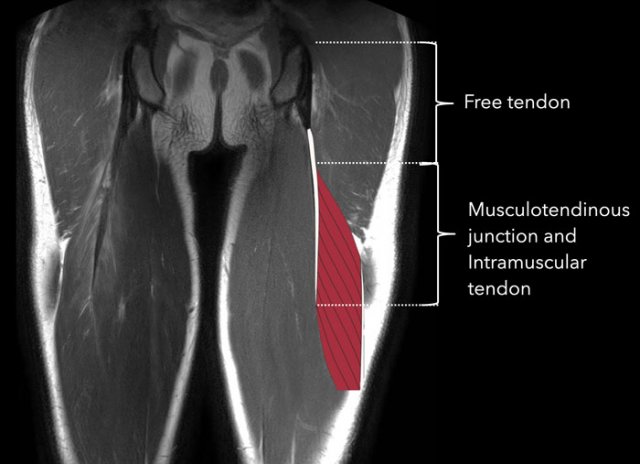 The free tendon is attached to the ischial tuberosity.

As the tendon enters the muscle, it forms the musculotendinous junction.
The muscle itself is surrounded by the fascia.

Notice that a large part of the tendon is intramuscular.

The hamstrings insert on the upper region of the ischial tuberosity.

On this posterior view you will notice that the semimembranous tendon inserts on the lateral side, while the muscle is located medially.
The Conjoint tendon of the biceps femoris and the semitendinosus inserts on the medial facet.

The ice cream flavors can serve as a mnemonic for which tendon is affected:
Caramel - Conjoint medial
Stracciatella - Semimembranosus lateral 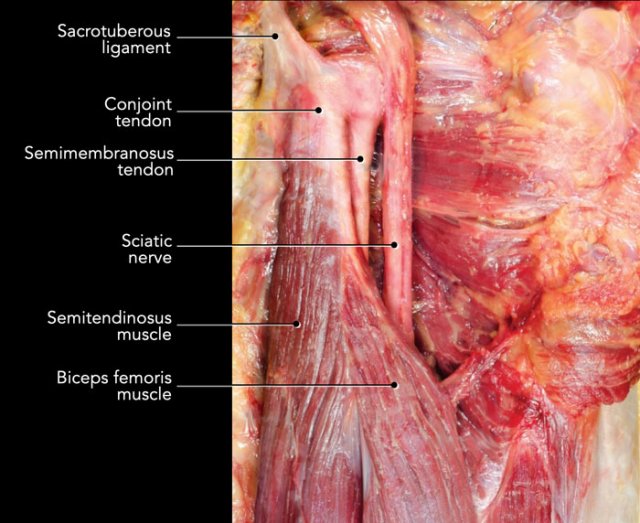 This is posterior view of a specimen of the right proximal hamstring complex after removal of the gluteus muscle.

The biceps femoris and semitendinosus muscle attach on the ischial tuberosity by means of a conjoint tendon, which has a superficial connection to the sacrotuberous ligament (STL). When the tendons are avulsed from the tuber but the connection with this ligament is intact, the STL can act as a ‘lifeline’ to prevent tendon retraction.

Note that the semitendinosus also has muscle fibers directly attaching to the ischial tuberosity.

The tendon of the semimembranosus runs underneath the conjoint tendon and attaches more lateral on the ischial tuberosity. 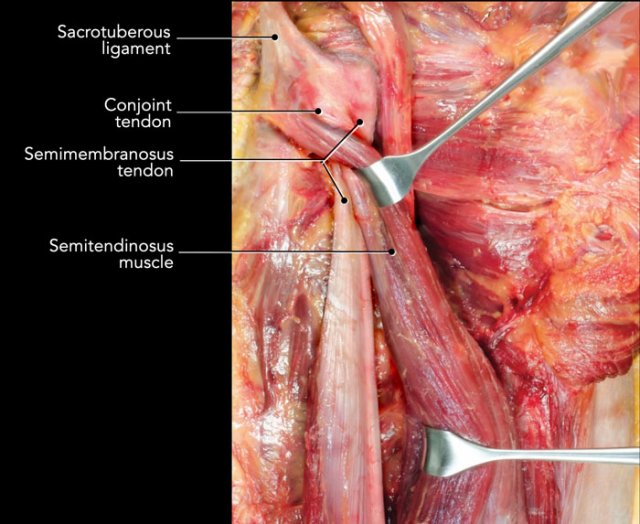 The sciatic nerve lies in close proximity to the proximal hamstring attachment, about one centimeter lateral. 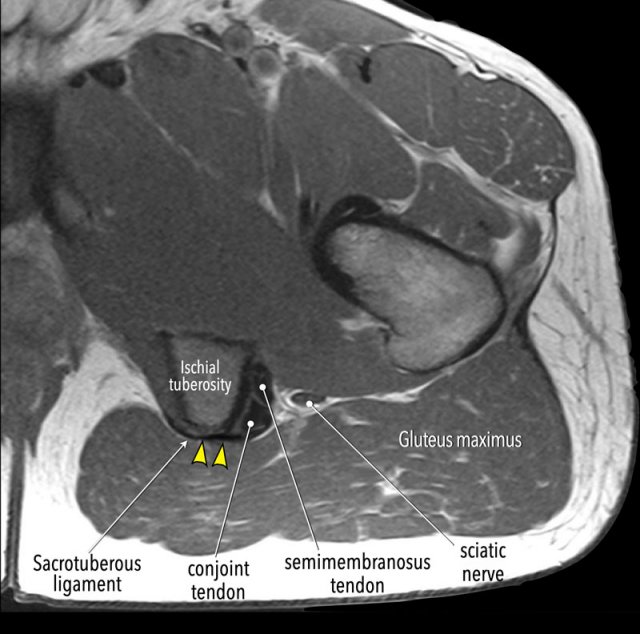 On this axial MR-image note the aponeurotic connection between the sacrotuberous ligament and the superficial part of the conjoint tendon.

In some cases, the tendons may be avulsed from the ischial tuberosity while this connection remains intact. In these cases no retraction will be present and surgery is usually not necessary. 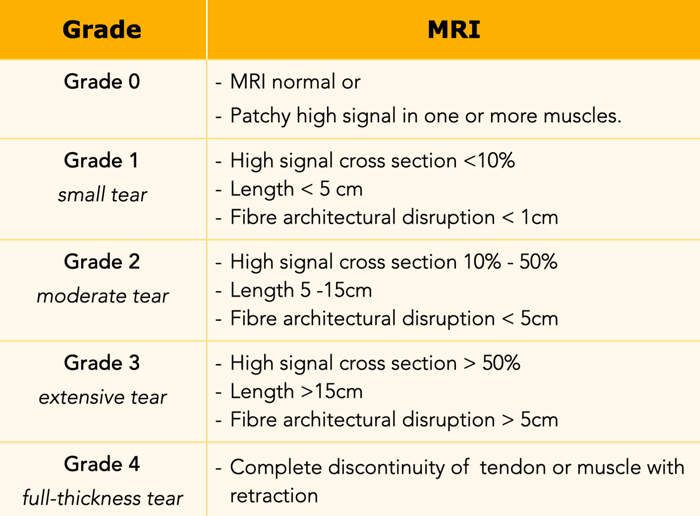 Hamstring injuries are graded according to the most commonly used BAMIC classification.

Grade 4 is a full thickness tear with or without retraction. 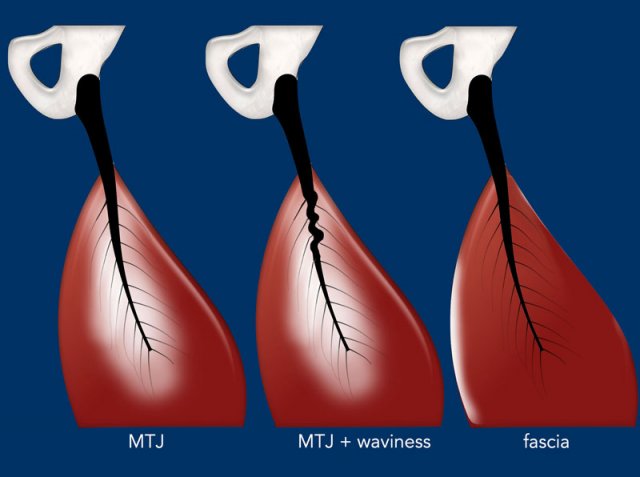 Partial thickness injuries (grade 0-3) usually involve the musculotendinous junction with or without waviness of the intramuscular tendon.
Sometimes the area where the muscle attaches to the fascia is involved. This is called a myofascial or epimysial injury. 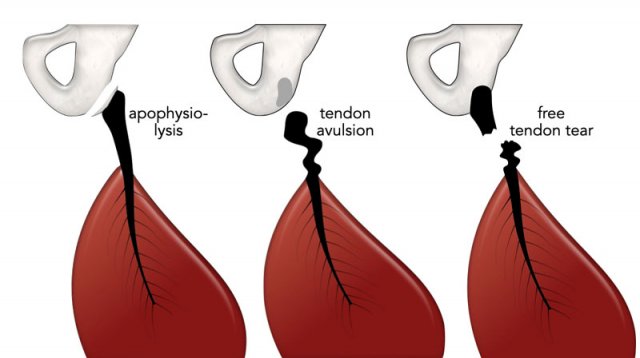 In young patients this can be an apophysiolysis of the ischial tuberosity.

In adults it is either a tendon avulsion or a free tendon tear.

Modifiers in the decision-making process and part of pre-operative planning are: 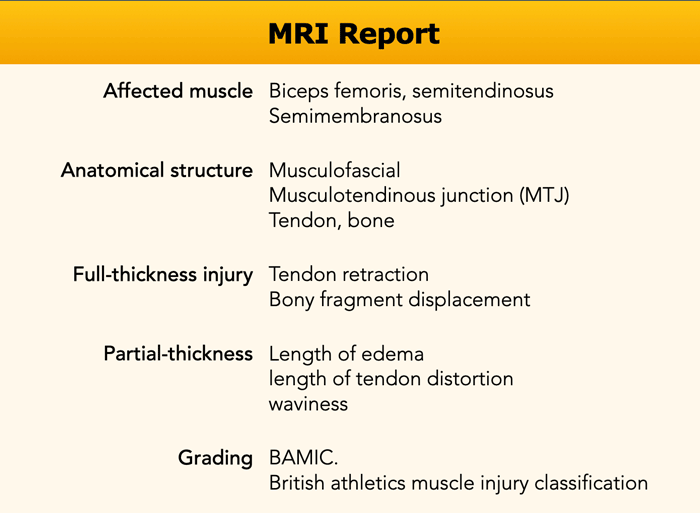 There is great interest in and debate how MRI findings can help guide prognosis, progression through the rehabilitation programme, and return-to-play decision-making. This accounts most for partial thickness injuries.

Therefore, all points from MRI report on the left are noted (with special interest for length of edema and distortion), although it remains unclear which finding is best in predicting prognosis. 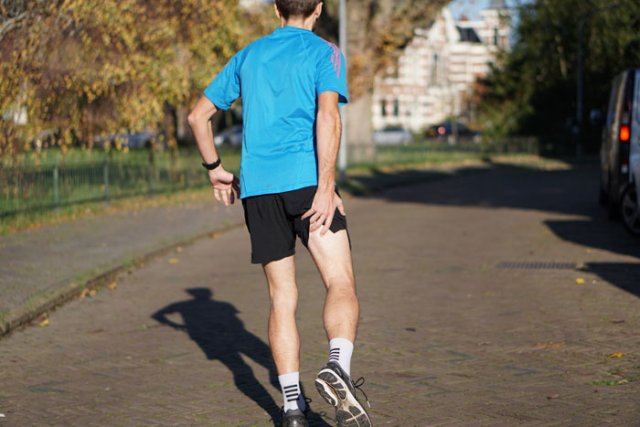 The vast majority of partial hamstring injuries are located at the musculotendinous junction (MTJ), where forces are transmitted from muscle fibers to the fibers of the intramuscular tendon. These injuries are typically seen when athletes reach for the posterior thigh in a sprint.

These injuries occur with or without concomitant injury of the intramuscular tendon. 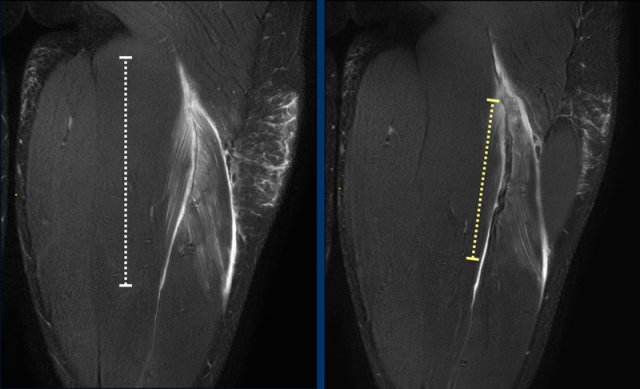 Presence of edema can be used to localize the injury.
Edema is typically present as feather-shaped high signal intensity as it surrounds the intramuscular tendon and fascicles. 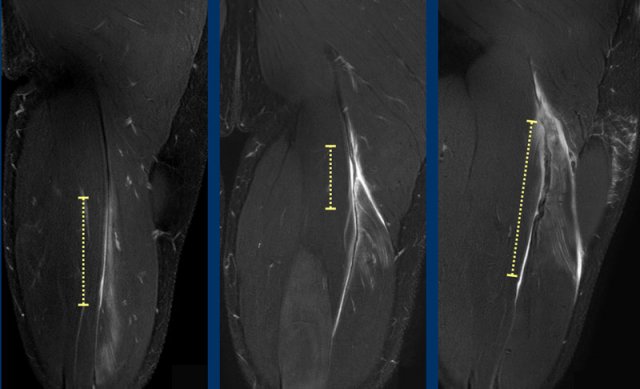 When the tendon looks normal, straining is probable low grade.
Tendon thickening, tendon waviness, high signal of the tendon can all be signs of higher grade straining.

All these signs have to be described in your report.
Total length of the distorted tendon is noted. 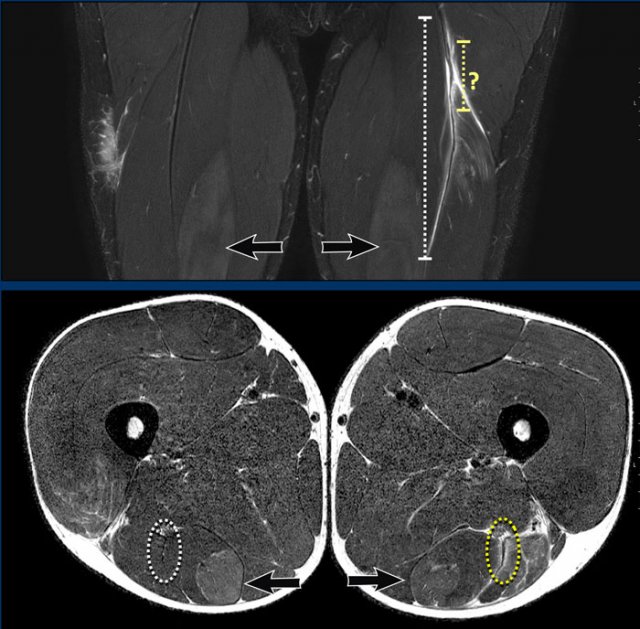 Based on coronal images alone, it is sometimes challenging to exactly classify the amount of distortion. Use the axial images to get a closer look.

On these axial images, high signal and thickening of the left biceps femoris tendon (yellow dotted circle) is seen when compared to the non-injured side (white dotted circle).

DOMS
In this patient, subtle muscle edema in the semitendinosus was seen, diagnosed as DOMS - delayed onset muscle soreness (arrow). 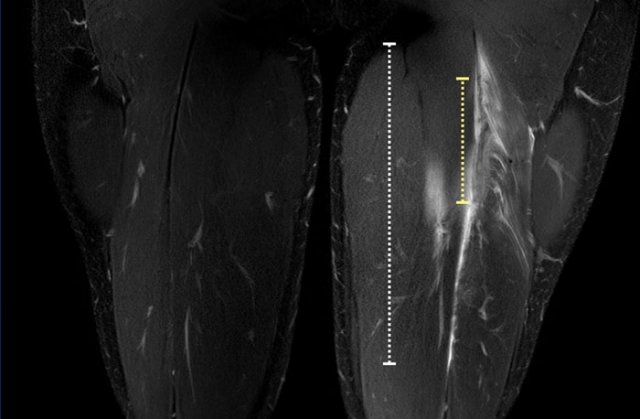 Both length of edema and distorted tendon are measured and noted in the report. 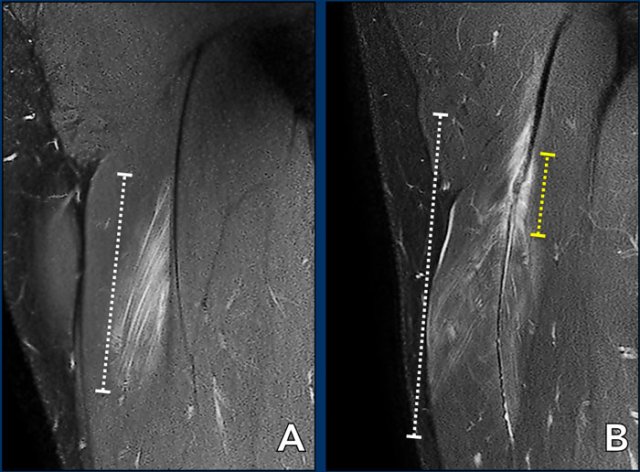 A muscle edema 5-10cm (white dotted line) present at the MTJ without architectural distortion of the tendon, classified as BAMIC 2b.

B muscle edema >15cm (white dotted line), at the MTJ / intramuscular tendon, tendon distortion > 5cm (yellow dotted line). The tendon shows disruption with loss of low signal intensity within the tendon along with a wavy appearance indicating focal loss of tension. BAMIC 3b/c. 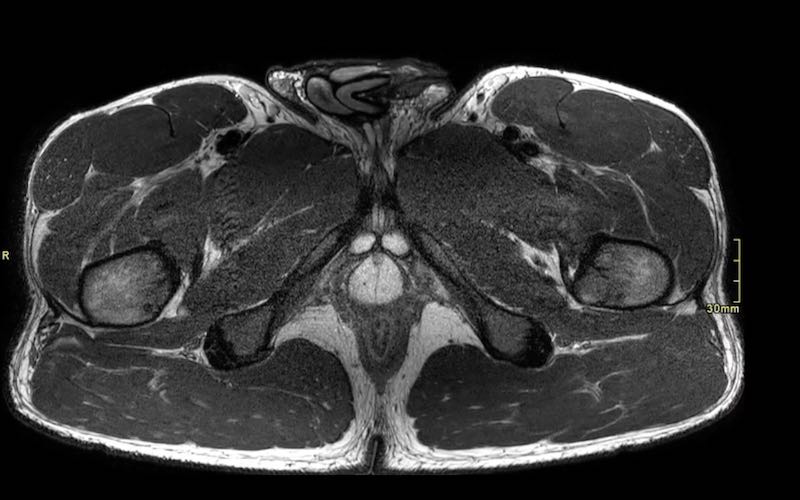 Here you can scroll through the axial images. You can enlarge the images by clicking on them.

This is a partial injury, it starts at the conjoined tendon proximal, covers both the MTJ and intramuscular tendon more distally. Length of edema and tendon distortion are of high grade. This was classified as a BAMIC 3b/c injury. 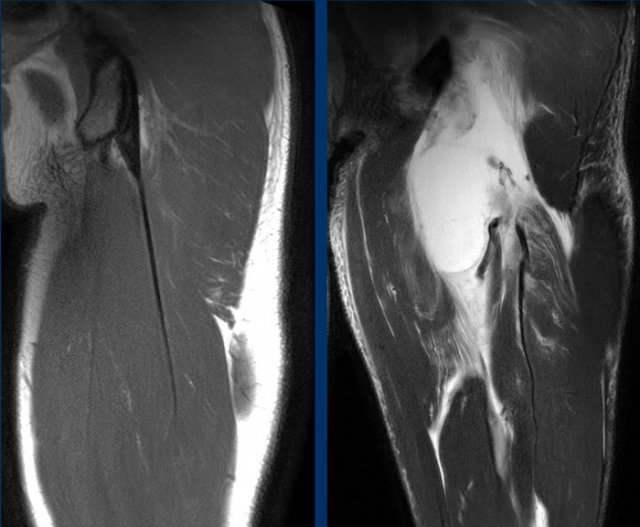 In full thickness injuries, the free tendon is torn and  discontinuous with the ischial tuberosity.

Since tension is lost, the tendon and muscle will retract from the tuberosity and a gap is seen.

The extent of tendon retraction or is considered an important factor for treatment decision-making.
Some experts advocate surgical repair when retraction is more than 2 centimeters. 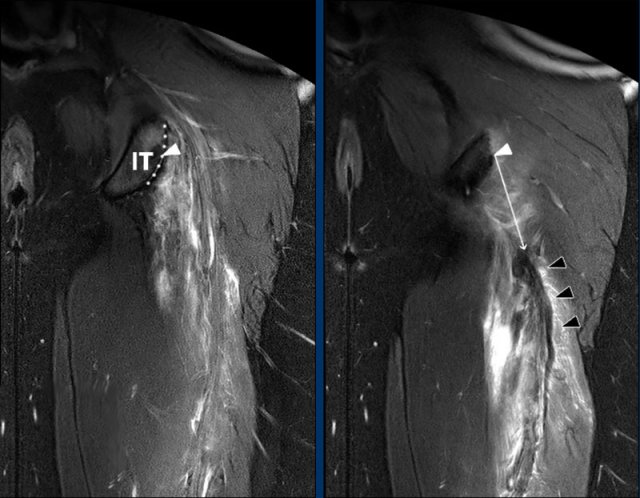 The most reliable method to quantify retraction is the ‘direct measurement’ on a coronal fluid-sensitive sequence.

First, the point representing the center (white triangle) of the proximal hamstring complex origin on the upper region (dotted line) of the ischial tuberosity (IT) is determined.
From this point, the direct (ie, shortest) distance (white arrow) to the most proximal part of the hypointense tendon stump (black triangles) is measured (in cm).

Note that determining the anatomic landmarks is done on different images within one MRI sequence. 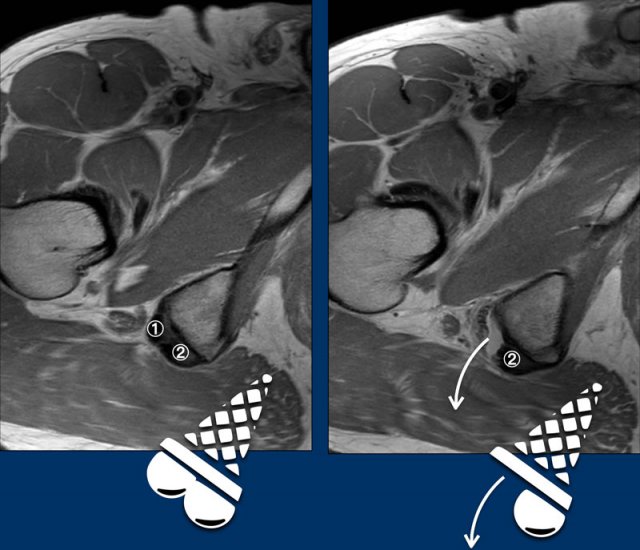 It is best to determine which tendon is torn on axial images.

The ischial tuberosity can be regarded as an icecream cone with the tendon of the semitendinous (anterolateral ) and the conjoint tendon (posteromedial ) as two scoops with the flavor StracciatelLa CaraMel.

The image shows an avulsion of the semimembranosus tendon. 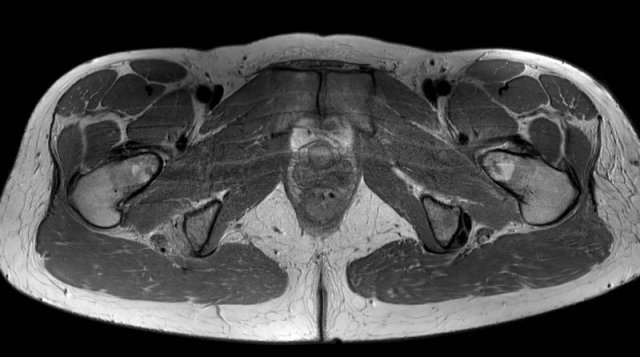 In this patient both the right semitendinosus tendon aswell as the conjoint tendon are avulsed.

Both scoops have dropped. 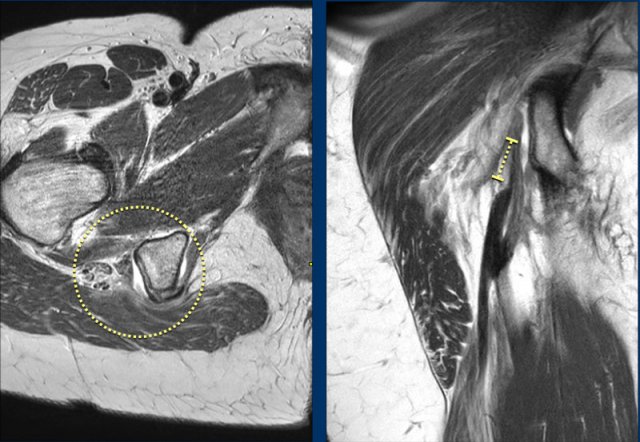 On these images a full thickness injury is seen.
Both scoops have dropped on the axial images, so both tendons are avulsed.

On coronal images total retraction was measured and noted.

In adolescents, a proximal hamstring injury is most likely located at the level of the ischial apophysis, since the bones are the weakest link.
Injury of the tendon itself or at the musculotendinous junction is rare.

This video shows an avulsion of the apophysis on CT.
Continue with the MRI...

MRI of the same patient.

This image shows a partial injury of the conjoined tendon of the right leg (yellow circle).
There is a large amount of surrounding hematoma in the muscle and alongside the fascia.

The edema surrounds the ischiadic nerve (yellow arrow), which can lead to neuropathy.
However there is a poor correlation between the MRI findings and the symptoms of the patient. 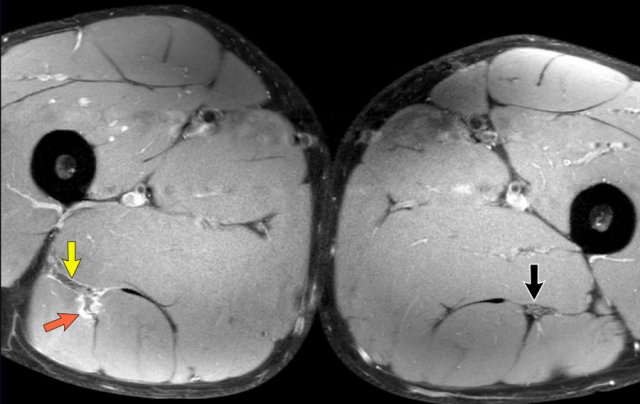 In this case, the partial injury is less pronounced. Still, the ischiadic nerve is enlarged and flattened due to the injury edema. 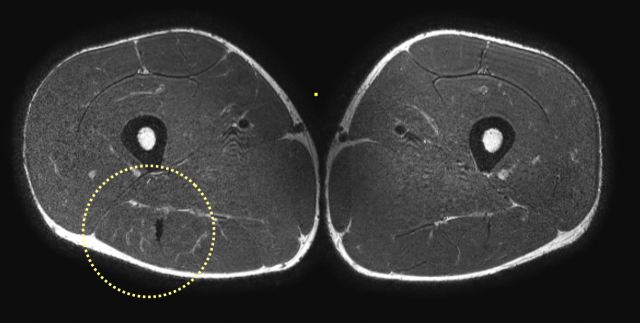 After the injury, it is possible that the tendon looks normal after healing. However, in most partial injuries, fibrous scarring is seen at the site of the previous injury (yellow dotted circle).

Quite often, when MRI is made for an acute injury, other sites of fibrous scarring of older injuries are seen. 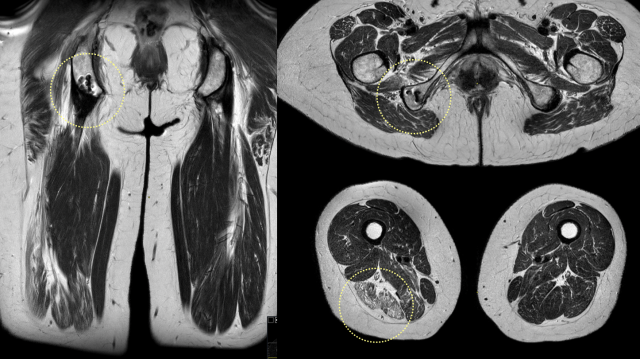 After a full thickness avulsion, tendons can be reinserted operatively. In this case, the anchors at the tuber can be seen. As a result from the injury, fatty atrophy of the muscle belly can occur. 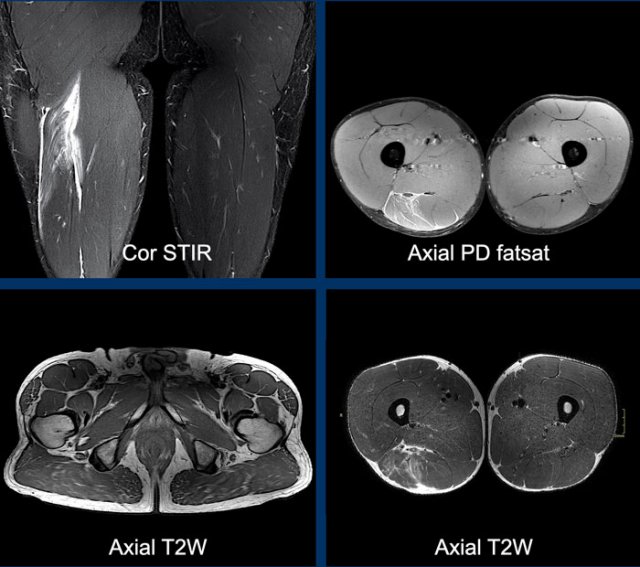 The MRI protocol is based on a coronal fatsat, Axial PD fatsat and axial T2 sequences.

The entire hamstring complex on both legs should be scanned on all sequences to compare the injured side with the non-injured hamstrings.
Especially partial injuries can be very subtle.
We only use coronal and axial planes for anatomy as it is more difficult to assess anatomy on sagittal planes.