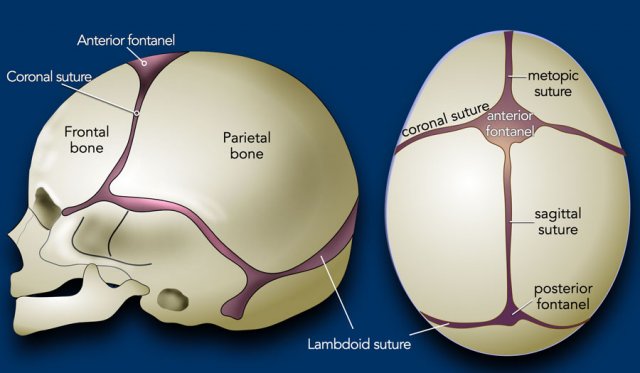 In the first few years of life the brain grows fast and the skull grows along with it.
This requires open sutures for enchondral growth.
At 1 year of age around 65% of skull growth is accomplished, with the growth rate thereafter slowing down, and reaching around 90% at 5 years of age.

Most craniosynostoses are the result of an intrinsic defect in the suture.
Craniosynostosis may be part of a syndrome and in those cases the craniosynostosis is often multi-sutural and there may be other anomalies (cardiac, kidney and skeletal). 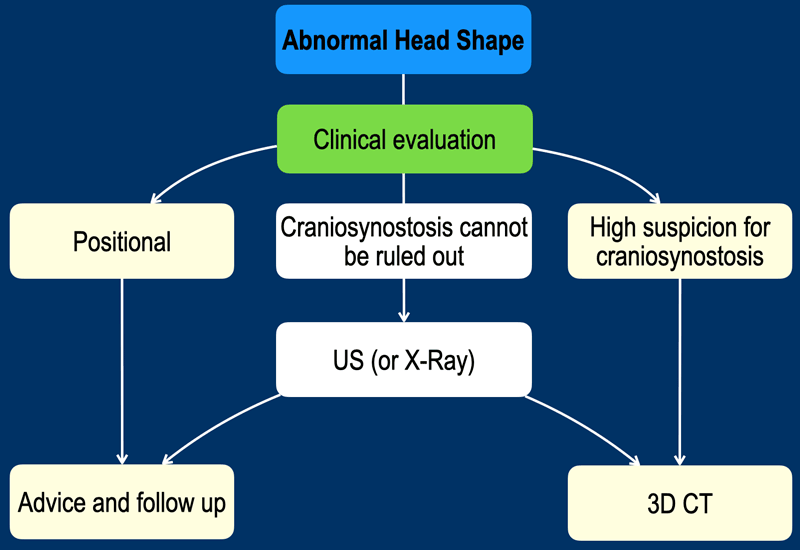 In the past decades there has been an increase in the number of children seeking medical attention because of an abnormal head shape, which is now reported as high as 1 in 5. Most cases are a positional plagiocephaly rather than a real craniosynostosis. This is often related to the advice of sleeping on the back to prevent sudden infant death syndrome.

A well-trained clinician will often be able to recognize the typical presentation of a positional plagiocephaly and distinguish from its main differential diagnosis of a unilateral lambdoid stenosis (see below).
The parents may then be reassured because the condition is self-limiting and with adequate advice usually reversible.

In case of a clinical high suspicion of a craniosynostosis timely reference to a specialized center may be advisable before diagnostic imaging is started (figure). 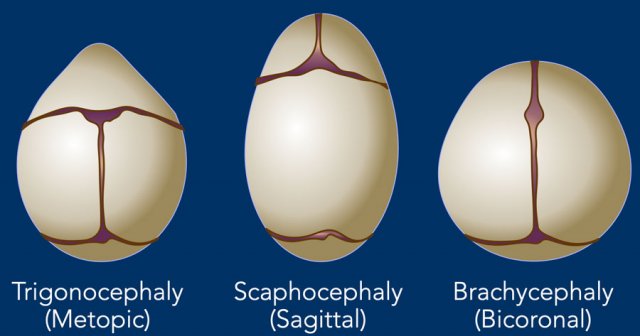 In craniosynostosis the skull deformity is present from birth and will be progressive.
Timely diagnosis is important, as earlier treatment leads to a better outcome.

In unisutural and bicoronal craniosynostosis a specific head shape may be expected, depending on the involved suture.
This is depicted in the illustration.

In multisutural involvement the changes are more complex and cannot easily be predicted. 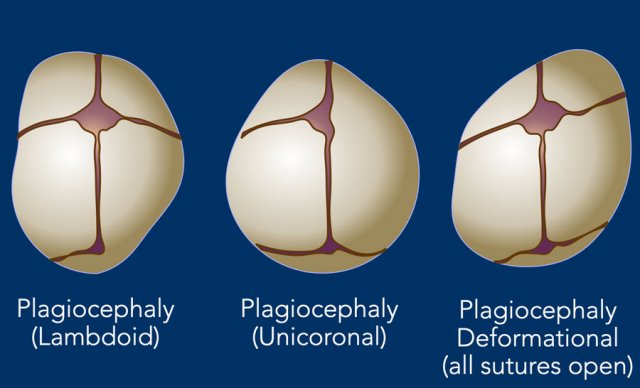 In plagiocephaly, also known as flat head syndrome, there is an asymmetrical flattening of one side of the skull.
A mild and widespread form of plagiocephaly is caused by remaining in a supine position for prolonged periods, as discussed above.
This is called deformational plagiocephaly. There is no synostosis and all the sutures are open.

When a craniosynostosis is suspected, the first line imaging will be ultrasound or x-rays, depending on local expertise and preferences.

Because of lack of radiation, ultrasound is  the preferred method.
In case of high clinical suspicion low dose 3D CT is preferred.

The figure shows the US of a normal suture, an unilateral coronal stenosis and a sagittal stenosis with ridge. 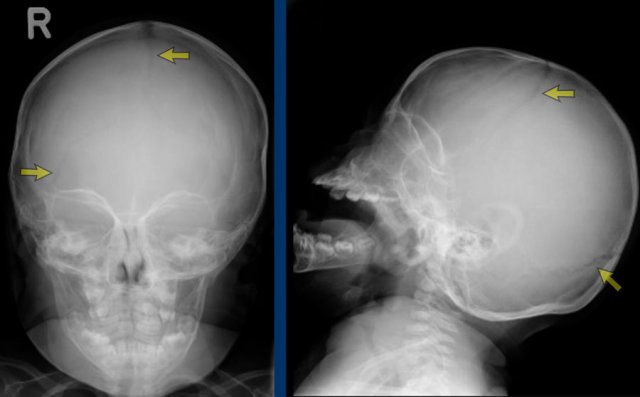 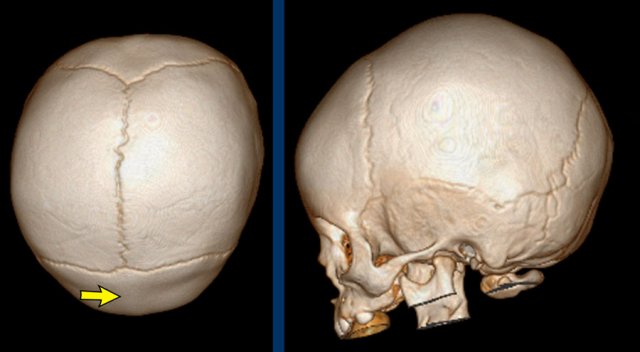 The images show open sutures in a child with a physiologically closed metopic suture (arrow). 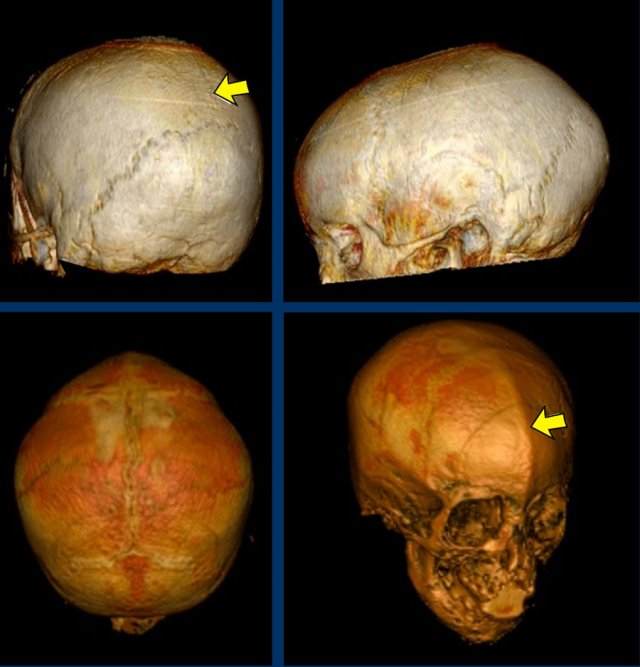 It is also possible to evaluate the sutures with black bone MRI, but as MRI often requires anaesthesia this will mainly be done in conjunction with an indication for evaluation of intracranial abnormalities and complications. 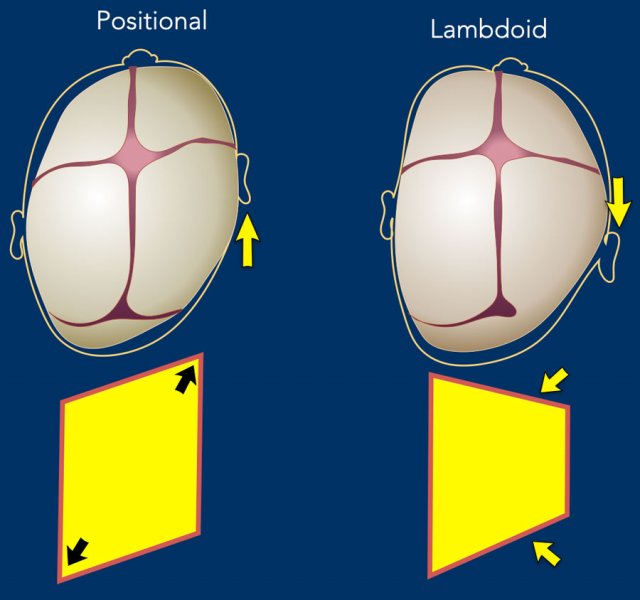 Positional or deformational plagiocephaly refers to the flattening of the head due to the baby’s preferred position.
It is not a synostosis, but the most common form of temporary skull deformity.

Typically, the entire side is pushed forward, hence the ear will be seen more anterior than on the contralateral side (arrow).

This is in contradiction to a posterior plagiocephaly resulting from a unilateral lambdoid suture stenosis, where the mastoid and the ear are pulled down and drawn back.

The drawing illustrates the differences.

In positional plagiocephaly the form of the head resembles a parallelogram.

In unilateral lambdoid stenosis the form of the head resembles a trapezium, because one side of the head is restricted in its growth. 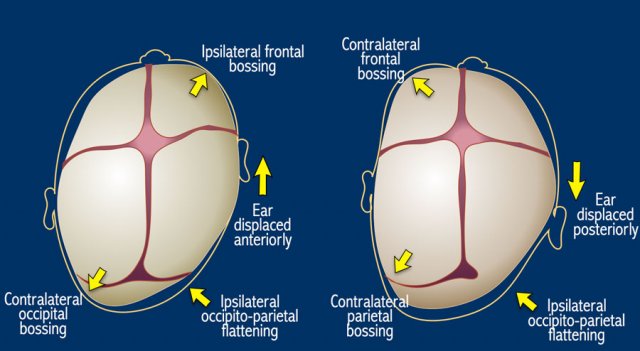 Here the same illustration with now all the differences between deformational and lambdoid plagiocephaly.

NOTE: unilateral coronal stenosis will also result in the ear being positioned more forward  – however, flattening will be seen frontal (anterior plagiocephaly) instead of occipital and typically the eye is drawn up on the affected side. 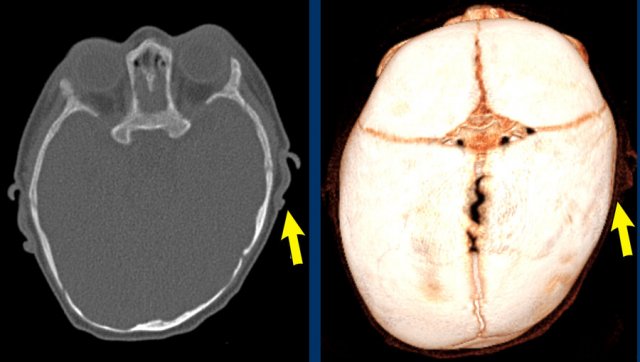 Positional plagiocephaly. The left ear is pushed forward.
Note: Adequate clinical evaluation and/or ultrasound should have obviated the need for CT. 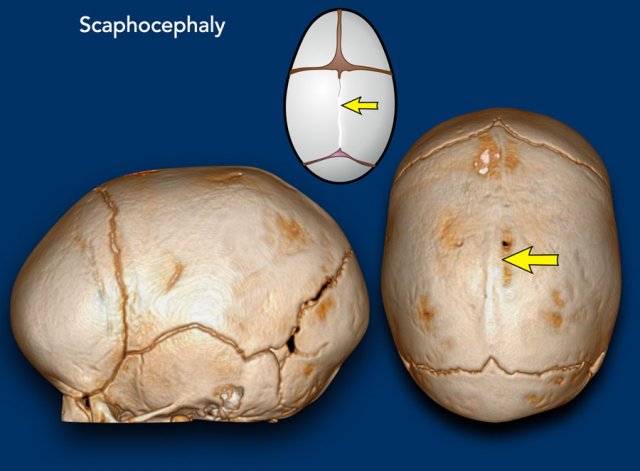 Scaphocephaly means ‘boat shaped’ skull and results from a premature closure of the sagittal suture (arrow).
The skull is narrow and long.

It is the most common monosutural craniosynostosis.
Sometimes it is called dolichocephaly, as ‘dolicho’ means long.

Images
Scaphocephaly: The head has a short laterolateral and a long anteroposterior diameter. 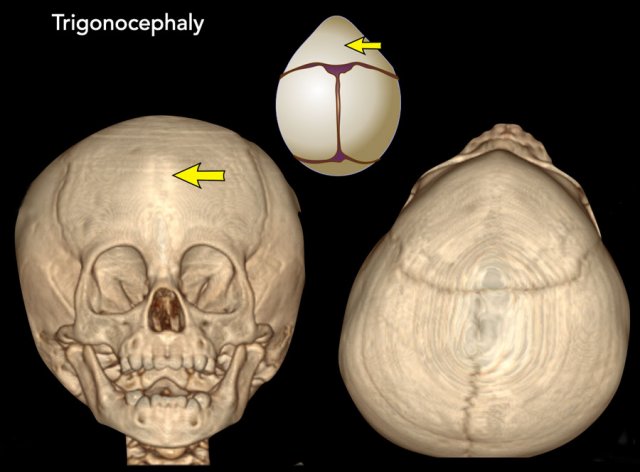 Trigonocephaly refers to the triangular head form resulting from premature closure of the metopic suture (arrows).

Physiological closure can already start as early as three months of age, so premature closure typically presents early.
The frontal head volume is small with a pointy forehead and hypotelorism.

Only pronounced cases require surgery and if there is clinically no indication for surgery, a CT is not needed.

Images
Trigonocephaly: Pointy forehead and hypotelorism. Seen from above the lateral orbital rim will be visible. 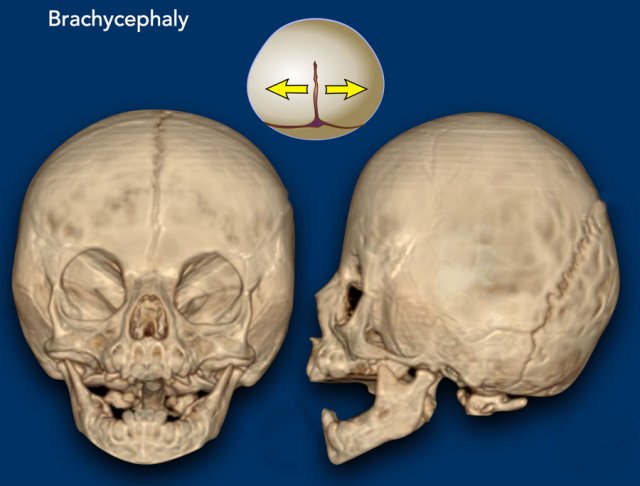 Brachycephaly results from the premature closure of both coronal sutures.
The frontal skull base is small with shallow eye sockets with the supraorbital rim drawn back and the head is shortened (‘brachy’) in the anteroposterior direction. 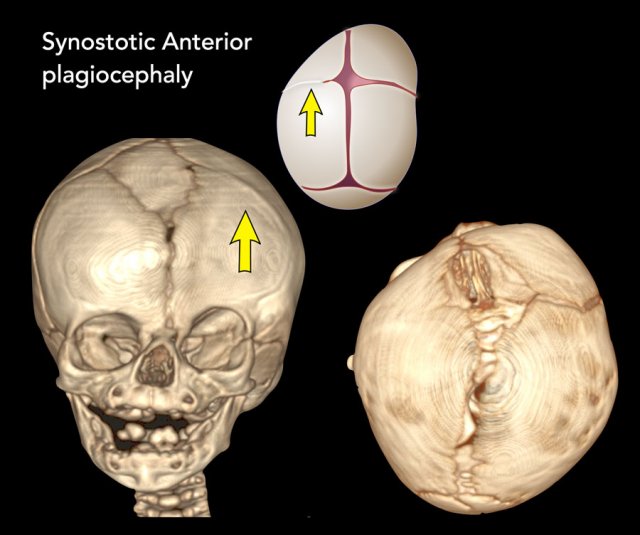 One of the coronal sutures has closed prematurely.
The forehead is flattened on the affected side with the eye socket drawn up, also called a harlequin’s eye, and the nose may be deviated.

Images
Left sided coronal synostosis. The left forehead is drawn back with the eye socket lifted up. 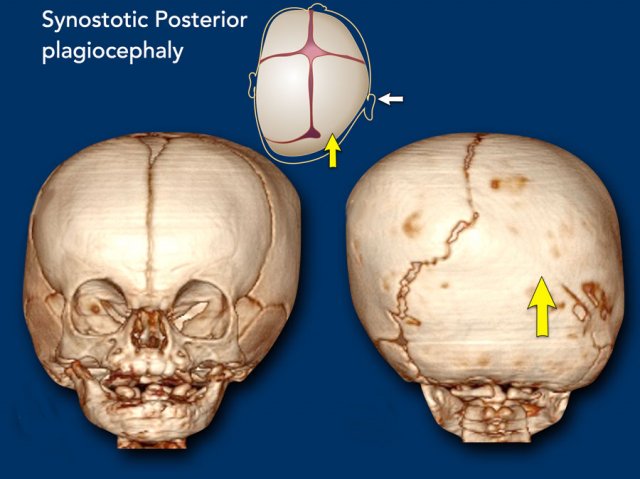 In this case the lambdoid suture has closed prematurely.
It is the main differential diagnosis for positional plagiocephaly (see above).

There is a risk for Chiari 1 malformation and MRI of the brain and craniocervical junction is advised. 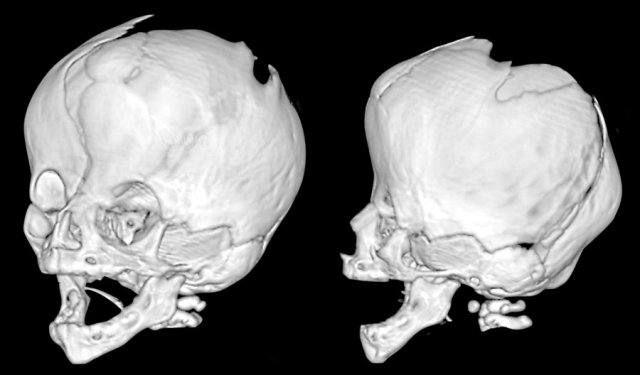 Multisutural craniosynostosis are complex deformations.
They are usually linked to syndromes and there are several genetic defects identified.

The best known craniosynostoses syndromes are Pfeiffer/Crouzon, Apert, Saethre-Chotzen and Muenke.
In the most severe cases all sutures will eventually close.
Such a ‘pansynostosis’ is a severe condition.

Images
Saethre-Chotzen syndrome. At two months of age there is a bilateral coronal synostosis with a severely deformed head shape. The fontanel is grossly enlarged. 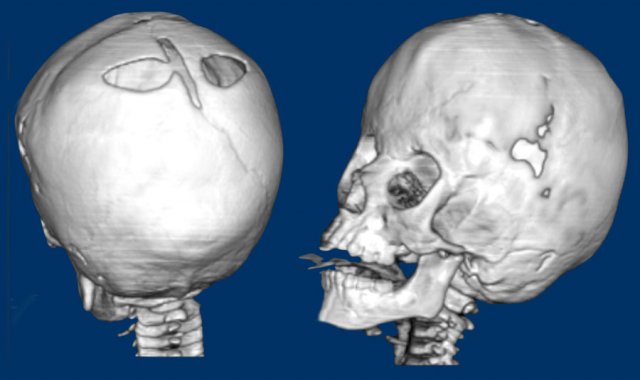 Same patient as above.

At three years old there is microcephaly from a near pan-synostosis.
Note enlarged bilateral parietal foramina. 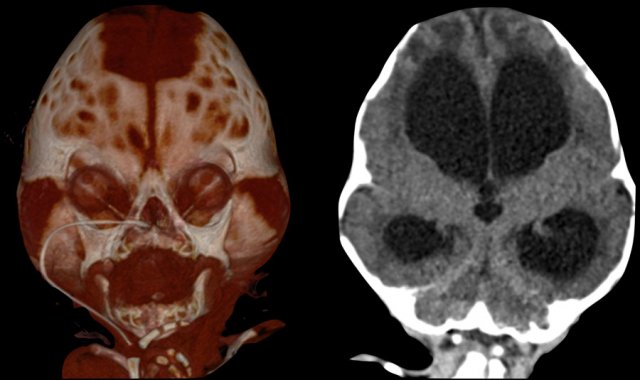 There is a bicoronal synostosis with enlarged anterior and mastoid fontanels.
Temporal bulging give rise to a trilobate appearance, also called ‘clover leaf deformity’.

Note the ventriculomegaly with periventricular edema.

MRI has a main role in detecting associated intracranial malformations and complications from multisutural craniosynostosis. 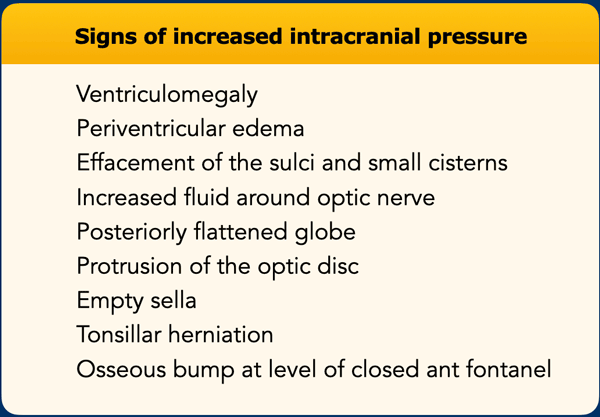 Signs that may indicate raised intracranial pressure are listed in the table on the left.

One of these findings is non-specific, but a combination of findings should raise suspicion.
Increased intracranial pressure may result in venous collaterals which may be important in preoperative planning.
Chiari malformation may result in spinal syrinx. 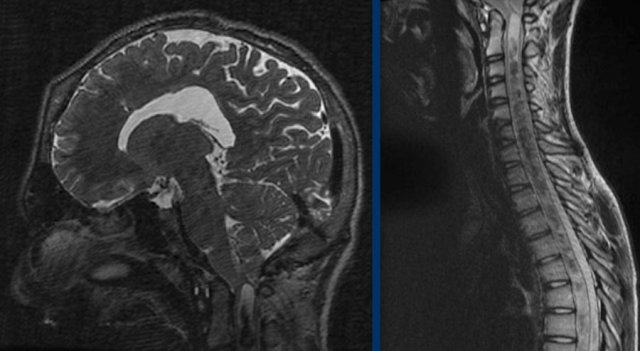 The images are of a patient with increased intracranial pressure.

There is tonsillar herniation with severe crowding at the craniocervical junction.
This has resulted in a syrinx over the entire length of the spinal cord. 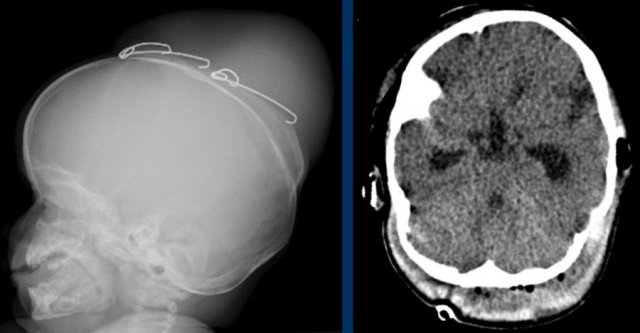 Surgery should be conducted timely in order to reach an optimal outcome.

Timing is dependent on the deformity, but usually preferably under the age of 6 months. Post-operative complications include blood loss, infection, brain swelling and CSF leak. 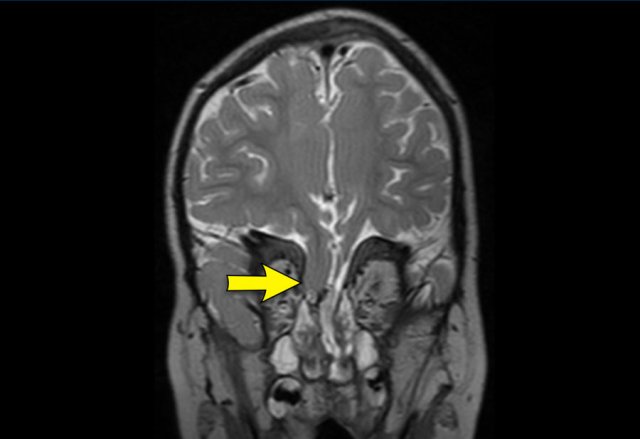 Image
Liquorroe due to CSF leak from a frontobasal herniation in the upper nasal passage after midface surgery in a patient with Apert syndrome. 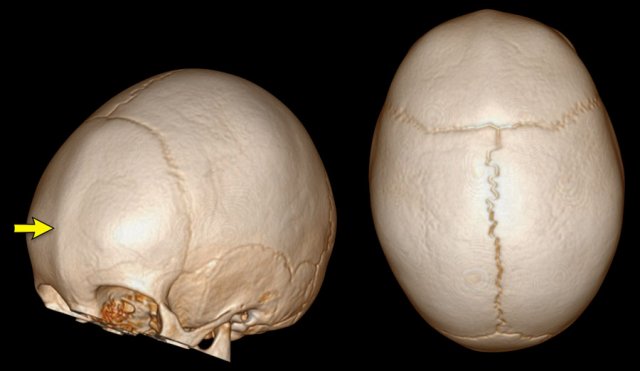 A metopic ridge alone is not equivalent to trigonocephaly.
Children present at a later age, the frontal skull has a normal volume and there is no hypotelorism.

It is a common deformity that can be clinically diagnosed and does not need imaging.
As with mild trigonocephaly, there is no need for surgery.

Images
Slight metopic ridge in a nine-month-old (arrow). Note that the scan was taken for a different purpose.
Metopic ridge can be clinically diagnosed and should not be imaged.
The anterior fontanelle has already closed but apart from the metopic suture, the other sutures are still open. 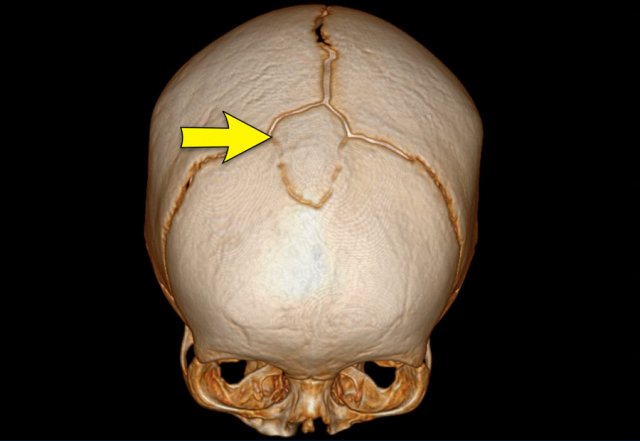 An absent anterior fontanelle does not have to be a reason for concern.
As long as the skull has a normal shape and circumference, and the sutures are patent – it does not have any clinical implications.

Image
Large wormian bone occupying the anterior fontanelle (bregmatic bone) in a six-month-old.
The skull has a normal shape and the sutures are open. The metopic suture has fused physiologically.